POLYECO S.A.  sponsored and participated in the very successful 12th National Chemical Engineering Conference organized by the National Technical University of Athens and the other chemical engineering schools of Greece. The conference offers the opportunity to new scientists to relay their results to the other scientists and the general public and provides a platform where the Universities and the industrial sector can discuss and cooperate.

Furthermore, POLYECO S.A. was a sponsor to the UnderPressure car team during the Chem e Car competition that took place during the conference.

The Chem E Car competition is an international student chapter contest designed to improve student creativity in chemical engineering through the design of a chemically propelled toy car.

This year 5 Greek teams competed outside the Stauros Niarchos Fountation near the Eugenidio conference venue.

The Underpressure team, with the support of Polyeco’s R&D personnel, designed the TUBE which is a car propelled by the neutralization of sodium bicarbonate and acetic acid to form carbon dioxide. The reactor is a high pressure polypropylene 125mm pipe which includes all required safety valves and fittings. The energy of the pressurized system is harvested by a pressure motor (form of a steam engine) that converts pressure into reciprocating movement, where a crankshaft converts it further to circular movement. The power of the motor is finally transferred through a belt to the wheels of the car.

The Underpressure team, a strong 4 girl-only team on site, won third place behind the cars of the Athens Technical University teams. 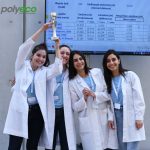 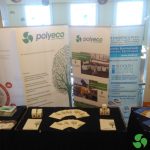 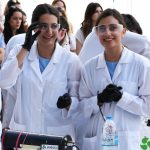 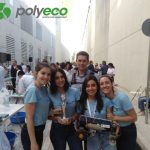 View all posts by: v.giannakou